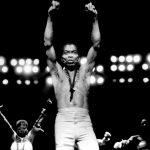 The Vice President of Nigeria Yemi Osinbajo stated that Afrobeat Star and legend, Fela Anikulapo-Kuti deserves national honour in Nigeria.
Prof Osinbajo made this statement at a town hall meeting in Edo State on Friday while responding to one of the people present at the meeting who had suggested that the
National Theatre Lagos be named after the
late music legend.
The Vice President said the late Afrobeat
maestro deserves such national honour from
the government even after his death both as a
Nigerian and father of Nigerian modern
music. However, he noted that the decision to
bestow national honour on Fela was not his
to make.
Fela was very vocal in his criticism of the
Nigerian government. With over 200 arrests,
government raids became common
in Kalakuta. After the release of Zombie, a
song describing Nigerian soldiers, the
government struck, beating him, throwing his
mother from the window and burning down
the Kalakuta Republic.