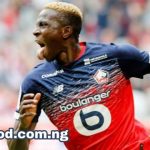 German Champion Bayern Munich are set to sign
Nigeria international, Victor Osimhen, as a
replacement for Robert Lewandowski,
according to Bayern Munich News to.
Both Bayern and AC Milan are monitoring the
performances of the Lille striker ahead of a
possible move.
The Bundesliga champions are in the market
for a striker as replacement for Lewandowski,
who is widely regarded as the best number
nine in the world and has been linked with a
move to Real Madrid in the January transfer
window.
The Super Eagles top nine is beginning to
fulfill his potential and his goalscoring form
for Sporting Chaleroi saw him earn a transfer
to Lille in August 2019.
The 20-year-old began his professional career
at VfL Wolfsurg, making 16 appearances in
total for the Bundesliga outfit before he was
loaned out to Sporting Chaleroi for the entirety
of the 2018-2019 season.
Osimhen has scored 28 goals since moving
to Europe and 20 of those came in the
colours of Sporting Chaleroi.