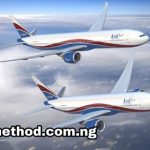 The Federal Government on Wednesday
dismissed calls that Arik Air be converted into
a national carrier rather than establishing a
new one.
It said Arik Air now under the management of
the government is not suitable for a national
carrier. The Managing Director, Asset
Management Corporation of Nigeria
(AMCON), Ahmed Kuru, had asked the
government to convert Arik Air to a national
carrier.
But while briefing State House correspondents
after a meeting of the Federal Executive
Council (FEC) presided over by Vice
President Yemi Osinbajo at the Presidential
Villa, Abuja, Minister of Aviation, Hadi Sirika,
said Arik Air is not suitable for a national
carrier.
Meanwhile, FEC has approved a total of
N5.72 billion for the construction and
consultancy services for the Nigeria Deposit
Insurance Corporation (NDIC) offices.
The Minister of Finance, Budget and National
Planning, Zainab Ahmed, said that N3.23
billion was approved for construction of NDIC
Zonal office in Bauchi State.
She explained that the sum of N2.49 billion
was approved for consultancy services for
stage-three work on NDIC corporate offices in
Abuja and Lagos.
Sirika, said that FEC also approved N574
million for insurance of College of Aviation in
Zaria.
He also said that N271 million was approved
for perimeter fencing of Port Harcourt
International Airport, which was abandoned
since 2011.
On behalf of the Ministry of Transportation,
the Minister of Information, Lai Mohammed,
said that FEC approved N718 million for the
supply of land mobile security scanner for
Lagos Port.