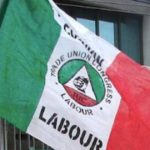 The Nigeria Labour Congress (NLC) yesterday
vowed to enforce the total implementation of
the new national minimum wage once the
issue of consequential adjustments has been
settled with the states.
The Labour congress threatened that with the signing into
law of the new minimum wage, any state that
violated its provisions would be sued.
The president of NLC, Comrade Ayuba
Wabba, stated the position of the workers
during the opening of its 2019 national
leadership retreat holding in Enugu, regretting
that Nigerian workers were forced to beg for
their salaries.
“While other countries have fully
accommodated and automated the process of
minimum wage adjustments and are now
focused on living wages, we are faced with a
situation where we are forced to bargain too
hard and wait for too long for meager
increases in minimum wage and adjustments
in salary.
“Let me also inform you that there is a
difference between the law we have and the
law that has existed from 1981 till date. In
1981 when the first minimum wage was
enacted, there was no provision for sanctions.
In this one we negotiated, there is a provision
for sanctions because it is already a law. Any
state or person that violates the provision of
the law, there are three ways to address it:
one is that the worker can report his union.
“Once you report, we can look at the means
and avenues, including court, to enforce the
provision of the law. So now there is a clout
to enforce the provisions of the law. Clearly
speaking, once there’s understanding or
agreement about the issue of consequential
adjustment, the issue is settled and where
there is the issue of non-respect for the law,
it can be enforced legally in a court of law,”
he stated.
According to Wabba, Nigeria cannot be
complaining of lack of funds to pay workers
decent wages and invest in public
infrastructure cum social services “when we
have a lot of public funds in private pockets”.
He went on: “It is no longer discussed in
hushed tones that the government is
struggling with liquidity. As we know, this
crisis is rooted in bad governance. Two
things define bad governance in this respect
– institutionalization of corruption in public
expenditure and weaknesses cum sabotage in
internal revenues accruable to government. On
corruption in public expenditure, the issue of
humongous salaries and allowances paid to
elected public officials and contract inflation
top the list of our concerns.
“On the other hand, the loss of government
revenue due to internal sabotage by
unpatriotic public officials is very alarming
and worrisome.’’
The labour leader urged the Federal
Government to reject additional loans from
the World Bank, and, instead, pursue the
payment of funds accruable to Nigeria from
periodic adjustments in remittances by
international oil companies (IOCs) subject to
increases in the price of petroleum above $20
per barrel.
He said the Federal Government officials
failed to activate the clause for more than 20
years thus allowing the IOCs to stash away
more than $100 billion in unpaid royalties to
Nigeria.
“We urged the Federal Government not to rest
on its oars until it recovers every kobo owed
us by the IOCs. Government officials behind
this criminal neglect must be prosecuted to
the fullest extent of the law. We call for a tax
system that captures many businesses, and
rich people must be compelled to pay more
taxes in commensuration to their income,” he
urged.
Governor Ifeanyi Ugwuanyi of Enugu State,
who opened the retreat, commended the NLC
for playing a pivotal role in the
implementation of government policies and
programmes.
He promised that his administration would
prioritize workers welfare. “Enugu State
workers will get a better deal in the
implementation of consequential adjustments
of the minimum wage,” Ugwuanyi said.
But his Ebonyi State counterpart, David Umahi,
said that following the drop in federal
allocation, his administration would soon
review the workers salaries.
Umahi disclosed the plan at the Government
House in Abakaliki when he distributed 68
Hyundai cars as official vehicles to some
members of the state executive council,
permanent secretaries and development
centre coordinators.
“It’s quite very tight. We are going into review
of workers salaries which is a must, a
commitment,” he stressed.
Meanwhile, the Minister of Labour and
Employment, Dr. Chris Ngige, has called on
the National Assembly to increase the
budgetary allocation of the ministry to meet
its operational needs.
He made the appeal while defending the
ministry’s 2020 budget estimate before the
Joint Senate and House of Representatives
Committee on Employment, Labour and
Productivity in Abuja.