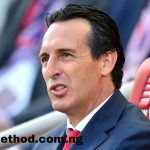 Unai Emery’s problems mounted as Arsenal
blew a two-goal lead amid VAR controversy
and captain Granit Xhaka feuded with fans in
Sunday’s 2-2 draw against Crystal Palace.
Emery was already under pressure after
Arsenal slumped to a shock defeat at
Sheffield United on Monday and the Gunners
boss has more fires to put out following his
side’s dismal capitulation at the Emirates
Stadium.
Arsenal were on course for victory after goals
from Sokratis and David Luiz put them two up
inside 10 minutes.But Luka Milivojevic started
the Arsenal collapse when he converted a
penalty awarded by VAR after Wilfried Zaha
was initially booked for diving.
Emery’s team faded in familiar fashion after
that and Jordan Ayew bagged Palace’s
deserved equaliser before Arsenal had a late
Sokratis winner disallowed by VAR.
Fifth-placed Arsenal, four points behind
fourth-placed Chelsea, have won just two of
their last eight Premier League games and
there is a growing sense that all is not well
with the club.
Xhaka’s remarkable bust-up with the crowd
laid bare the simmering tensions.
When Xhaka was replaced by Bukayo Saka,
the disliked Swiss midfielder trudged slowly
to the touchline while petulantly gesticulating
to the fans who had cheered his substitution
and were now angrily urging him to get off the
pitch quicker.
Xhaka’s incredible tantrum climaxed when he
ripped off his shirt and stormed straight down
the tunnel to more derision from the stands.
The match finished to a soundtrack of boos
from Arsenal supporters who sang Mesut
Ozil’s name in a pointed reference to Emery’s
decision to once again leave out the German
star.
It seemed Arsenal might lift the gloom from
their depressing trip to Bramall Lane when
they opened the scoring in the seventh
minute.
When Wayne Hennessey and Gary Cahill made
a hash of heading clear from Nicolas Pepe’s
corner, Xhaka nodded the ball down for
Sokratis to fire home through a crowd of
players for his first goal since April.
– Arsenal storm –
Goals from set-pieces are something of a
rarity for Arsenal, while Palace hadn’t
conceded one from that route all season.
But just two minutes later Arsenal netted
again from another corner.
Pepe’s delivery was glanced on by Alexandre
Lacazette and, with the Palace defence slow
to react, Luiz pounced with a tap-in at the far
post.
Lacazette nearly made it three when he
controlled Kieran Tierney’s cross and
swivelled for a low shot that forced
Hennessey to save at full stretch.
Zaha responded in the 32nd minute as the
Ivory Coast winger showed why Arsenal tried
to sign him in the close-season before
switching their attentions to his compatriot
Pepe.
When Zaha tricked his way past Calum
Chambers in the Arsenal area, the defender
clearly stuck out a leg and tripped the Palace
star.
Martin Atkinson thought otherwise and
booked Zaha for diving, but justice was done
when a VAR review reversed the referee’s
decision, awarding a spot-kick that Milivojevic
stroked home with ease.
Pepe went close from the edge of the area,
but Palace were looking more menacing and
Patrick van Aanholt’s stinging drive drew a
good save from Bernd Leno.
With Arsenal creaky at the back, it was little
surprise that Palace equalised in the 52nd
minute.
Pepe complained he was fouled by Van
Aanholt in the build-up, but Arsenal still had
plenty of time to stop James McArthur lofting
a cross towards Ayew, who peeled away from
the dozing Luiz to head home.
Arsenal tried to quell the storm after Xhaka’s
bizarre exit, but Lacazette’s thudding effort
rattled the woodwork. Sokratis thought he had
won it from close-range in the 83rd minute
after Lacazette flicked on Pepe’s corner.But
for the second time in the match, VAR went
against Arsenal as the goal was ruled out for
Chambers’ foul on Milivojevic.