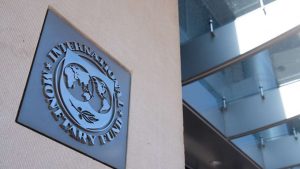 The loan, to be repaid within five years, is the largest allocation yet by the IMF to an African country’s bid to contain the pandemic.

Hit by crashing oil prices and lockdowns, Nigeria requested the amount, which is the total of its existing holding with the IMF, under the Rapid Financing Instrument, which offers funding without the strings of a full programme.
Without the loan, Nigeria’s economy could shrink drastically, as the collapse of the price of crude, which makes up more than half of government revenues and 90 per cent of exports, has made it difficult to finance the 2020 budget.
IMF’s Managing Director Kristalina Georgieva had said last week that the fund would mobilise more than $18 billion for more than 40 African countries that requested assistance to battle the pandemic.

As at April 15, 2020, up to a hundred countries had approached the IMF for similar support under its rapid financing instrument. They urged the fund to ramp up crisis response for emerging markets and developing countries to mitigate the impact of the pandemic.

This was as the Senate, without a dissenting voice, yesterday gave accelerated approval to the request by President Muhammadu Buhari to access a fresh loan of N850 billion from the domestic capital market.
The approval came less than five minutes after Senate President Ahmad Lawan read the request to the lawmakers at the plenary session.
To achieve the immediate approval of the president’s request, the Senate suspended order one of its standing rules, which stipulates that such a request be referred to the relevant committee for thorough parliamentary deliberation.

Buhari had in a letter to the Senate president stated: “To ensure that there are adequate funds to finance critical projects and programmes in the 2020 budget, I hereby seek the Senate’s approval by resolution to raise the N850 billion of new external borrowing in naira from the domestic capital market instead of from the international capital market.”

The president lamented the inability of the Federal Government to seek the loan from the international capital market, which according to him would have been more beneficial. He also drew the attention of the Senate to provisions in the 2020 national budget, which empowered government to raise the loan to fund the capital budget.

He said: “The Senate may wish to recall that the 2020 Appropriation Act provided for N1,594,986,700,544 of new domestic borrowing and N850 billion of new external borrowing. These borrowings were to part finance the 2020 budget deficit of 2,175,197,885,232 only.”
He noted that although “external borrowing from the international capital market increases Nigeria’s external reserves, provides access to lower costs as well as avoids crowding out private sector borrowers who also wish to access the domestic capital market, recent developments in the global economic environment as a result of the coronavirus pandemic and the decline in international oil prices have made it less attractive to borrow from the international capital markets at this time.

“However, it remains our intention to access the international capital market when conditions improve to refinance this N850 billion of new borrowing and epitomise the benefits inherent in external borrowing.”
According to him, “The conditions in the domestic capital market are favourable in terms of availability of funds and relatively low interest rates. This cause of action is deemed prudent, given our current realities.”
Buhari informed the Senate that he had “directed the Minister of Finance, Budget and National Planning to make herself available to provide any additional information or clarification which you may require.”
Following the approval by the Senate, Lawan directed the Senate Committee on Finance to liaise with the Minister for Budget and National Planning to get further details on the loan.

Reacting to the development, the Chief Executive Officer of Cowry Asset Management Limited, Johnson Chukwu, said: “It might be difficult for the Federal Government to raise fund externally. So, it is expected at this time because government’s proposed revenue has collapsed. It will therefore not be able to meet its financial commitment if it does not access new funding sources.
“Right now, the external borrowing plan from the private sector cannot materialise due to the current global pandemic. It is a good step in the right direction for government to look at the local market for its borrowing need.”
He explained that the decision would stimulate economic activities and trigger increased volume of transactions in the local bond market.
According to him, “Since it is targeted at infrastructure development, it will have catalytic impact on the economy. When the infrastructure is completed, it will create employment for the people and improve productivity.”
On his part, the President of Association of Stockbroking Houses of Nigeria (ASHON), Patrick Ezeagu, advised: “Government should go about it the right way. The fund must be deployed on a specific project, not on a basket of projects, so that the project can be monitored. It will also help to avoid some leakages and misappropriation when it is channelled on a particular infrastructure project.”
Also, the German government yesterday relieved Nigeria of debt repayments amounting to €22.4 million (N8.9 billion).
It also announced a donation of €5.5 million (N2.2 billion) to the Nigerian Humanitarian Fund (NHF) for aid initiatives in the northeastern states of Borno, Yobe and Adamawa.
Making the disclosure in a statement in Abuja, German Foreign Minister Heiko Maas said: “German treasury relieves Nigeria of debt repayments amounting to €22.4 million. This comes in addition to Germany’s support to the COVID-19 response on a global level and the support provided by the European Union (EU) to partner countries in Africa worth €3.25 billion.”
Maas said the German government had successfully campaigned in the G20 and the Paris Club in favour of a debt moratorium for countries heavily impacted by the economic impact of COVID-19.

Stressing the need to diversify the economy, the House of Representatives Speaker Femi Gbajabiamila said the reality of the COVID-19 pandemic called for a wholesale reform of the governing structures, systems and processes. He said this entailed a drastic reduction in the cost of governance coupled with determined effort to drive economic diversity and innovation in the non-oil sector.

In an address yesterday at the start of an emergency session on the pandemic, the speaker said: “We have already begun to see the effect in millions of lost jobs, lost incomes, lost revenue and severely diminished productivity. In the past week, we saw oil prices fall into negative value. Our country, heavily dependent on crude oil income, has seen a drop in our revenue so severe that we risk failing to meet even the most basic obligations of governance.
“We must turn this moment of profound crises into an opportunity to make the hard choices we have too long deferred but can now no longer avoid if we are to survive as a nation. This House of Representatives is ready, and I trust that we will find allies in government and across our country who are prepared to make the changes that our country needs to survive, recover and thrive.”
He further expressed the House’s resolve to codify the National Social Investment Programmes (NSIP) into a bill and also pass the Economic Stimulus Bill, to provide relief to individuals and corporate organisations in the country.
Echoing the speaker’s concern, Lawan had also admitted: “The pandemic has unsettled economies, affected the way we relate to each other and disrupted calendars of activities across different sectors. Our sessions have been interrupted, but we have sustained our interventions and collaborations with other arms and agencies of government in a concerted bid to mitigate the damage from the pandemic.”

IMF approves $3.4 billion for Nigeria’s emergency funding.
Journalists covering the National Assembly, meanwhile, couldn’t access the complex yesterday as they were barricaded by stern-looking police officers. Claiming they were acting on orders from above, the officers threatened to use force on any journalist who failed to comply.