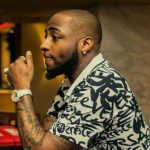 Nigerian music star  Davido has again made the news today after a young lady released a video claiming he impregnated her sister.
Davido who recently welcomed his third child, a son, with his girlfriend Chioma.
According to the lady in the video,who said  Davido impregnated her sister and refused to take responsibility for it. The young lady went on to say that her sister has been trying to call the singer but has not been able to reach him.
The video has since caused a stir online and has gotten many bashing the ladies.