Female Lawyer Beaten By Her Client For loosing a Court Case 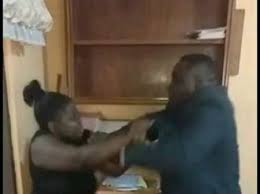 A female lawyer working with Nnoko Ngaaji Chambers in the City Tiko in Cameroon got more than what she bargained for yesterday. The female lawyer identified Barrister Evelyn Egbe by our reporter friend in Cameroon.

According to the information, we have gathered so far, Barrister Evelyn Egbe who works at the above chamber represented her clients in wearing a suit in the pictures identified as Mr. Njuofan Sinju Gabriel resident in the city of Tiko lost a court case. Mr. Gabriel was not happy about how his lawyer Evelyn Egbe handled his case at the court and held her responsible for the loss of the case.

Instead of Mr. Gabriel to accept the court verdict in good faith, he went to the Chamber and head straight and his lawyer’s office and begin to beat her up as captured in the pictures below. The pictures are now serves as evidence.

As at the time of his report Tiko Lawyers Association has taken the case up represented by the Association President Barrister Fih Davidson. Mr. Gabriel has been arrested and will be charged to court for assault.