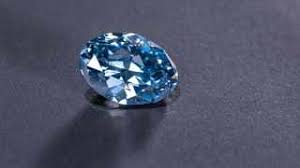 How A South African diamond producer on Wednesday announced it had found five blue diamonds stones, considered to be among the world’s rarest and most valuable, at its primary mine.

Petra Diamonds Limited said the Type IIb gems were discovered in the space of one week’s production at its Cullinan mine, around 40 kilometres (25 miles) east of South Africa’s administrative capital Pretoria.

All five stones are individual — as opposed to being originally part of a larger diamond — and their sizes range from 9.61 to 25.75 carats. “Blue diamonds are so rare that there are no official statistics on their recovery,” Petra said in a statement, noting that it was “unusual” to find “five high quality stones around the same time”.

Cullinan mine is one of the world’s most important sources of blue diamonds, according to the company.

The last significant discovery was a 20.08 carat blue gem found at the site in September 2019, which sold for $14.9 million to an anonymous buyer. Petra said it was “maintaining a flexible approach to sales” for its latest find and “still evaluating the optimal route to market for the stones”.

The group, which has three mines in South Africa and one in Tanzania, was battling with debt and falling diamond prices even before coronavirus shuttered the global gem trade. It warned that the five blue gems, whilst a “positive development”, would “not have a material impact on… the required long-term solution to improve the group’s capital structure”.