Unbelievable as music star Davido wins another important award beating other artist to clinch num one artist of the year 2020 Turntable. The Nigerian Music Charts Publication made this know yesterday.

Topping the Turntable has been a great honor to him as it shows how hard he has worked in the year 2020. Even though he was not able to get nominations in the Grammy awards, he has been applauded for his hard work in Nigeria.

In the Turntable chart spotted, he had the top music artist, youtube artist, and also with his song dubbed ‘FEM’ was also chosen as the top afro-pop most-streamed Song of the year.

His rankings are as follows:

Davido’s song ‘FEM’ went viral amid the EndSars protest after he used the word to reply to a politician’s comment on Twitter.

Even though it was released before the EndSars got to the extreme, he faced the backlash of social media users due to the perception that he took chances to make a song a hit.

See the screenshot of his success below: 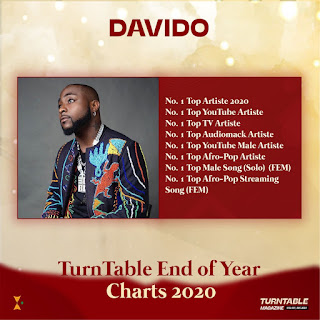