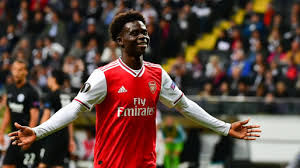 Nigeria are working hard to convince Arsenal youngster Bukayo Saka to commit his future to them.

The 18-year-old is a key talent for the Gunners, and could opt to play for England.

He plays left wing and left back, Nigeria hope to convince him to pick them for his international career.

Saka has been a revelation for Arsenal this season. The 18-year-old has thrived in Arsenal’s left-back role although Mikel Arteta sees him settling into a more advanced wide role in the future as he signed a long term contract at the North London club.

The Nigerian blood has played for England at junior level, and is currently with the under-19 side.

While England would likely give him an under-21 spot, Nigeria may push him up to the senior team as an incentive.

Continue Reading
You may also like...
Related Topics:Super Eagles