According to an eye witness who pleaded anonymity, the fire outbreak resulted from a spark on the electricity current when occupants of the two flats have gone to work which made the fire to raze down the two flats completely. 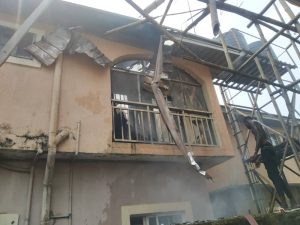 He revealed that efforts of the men of the Anambra State Fire Service and good citizens of the state helped in safeguarding the whole building that would have been burnt down by the inferno.

The Caretaker of the building, Mrs. Victoria Chidi-Akim who described the fire disaster as highly unfortunate, said that one of the occupants of the flats is a widow who just lost her husband and called on the Anambra state government and other good spirited individuals to come to the aid of the victims, due to the current harsh economic condition of the Country. 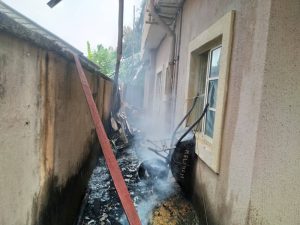 Meanwhile, Management of Anambra State Fire Service, and State government officials have continued to advise residents to be fire and safety conscious, especially this harmattan period.