Oscar award-winning director Gene Deitch is dead at the age of 95.
It is gathered that the Tom and Jerry director died on Thursday night at his apartment in Prague in the Little Quarter area. 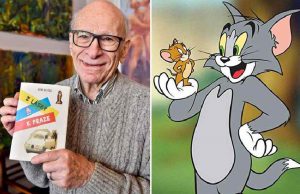 Speaking to The Associated Press, his Czech publisher Petr Himmel said he died “unexpectedly.”
Born Eugene Merrill Deitch, he directed 13 episodes of Tom and Jerry and several episodes of the series Popeye.
He was born in Chicago but moved to Prague in 1959 after what was only supposed to be a 10-day visit. But he fell in love with his future wife, Zdenka and stayed in the Czechoslovakian capital.
The animator and illustrator won the Academy Award for Best Animated Short Film for Munro in 1960.

Gene was the co-producer of Sidney’s Family Tree which was nominated for an Academy Award in 1958.
He was then nominated for the same award twice in 1964 for his movies Here’s Nudnik and How to Avoid Friendship.

In 2004 he was presented with the Winsor McCay Award for his lifelong contribution to animation.
He is survived by his wife and three sons from his first marriage. The children all followed in his footsteps and work as cartoonists and illustrator.