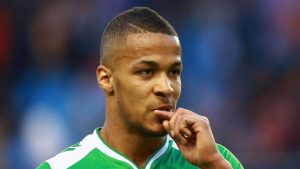 Both players formed a formidable partnership during the qualifiers for the 2018 FIFA World Cup in Russia and the 2019 Africa Cup of Nations in Egypt.
But Balogun has since lost his position, after failing to secure playing time with Brighton.

He has now been loaned to championship side, Wigan this season.
“There have been many different partnerships I have played with. Again over the last five years, the games I have played, most of them with Leon,” Troost-Ekong told Super Eagles media team in an Instagram chat.

“He has been very good, I think we have good understanding. Leon has more experience, he came one year before I played my first game for the Super Eagles.

“He is like a big brother to me and it has been good playing with him, I have learned a lot from him as well.
“It always makes it easier when you have the same kind of mentality because you can understand each other well and you make good decisions together.”