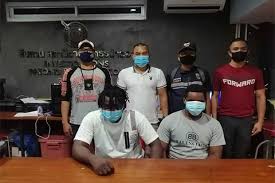 The arrests came after Patong police were asked by the Songkhla immigration police to track down suspects in a romance scam who posted profiles of good-looking men on Facebook to strike up conversations with women in search of foreign partners, deceiving them into believing they really existed and winning their trust. After a while, they exchanged names and addresses.

At this point, the scammers would tell the women they had some valuable items for them and they would send the items. They tricked the women into transferring money to them, Bangkok Post reports.

Continue Reading
You may also like...
Related Topics:Foreign issues